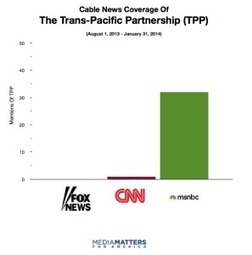 According to Congressional Lobbying Reports linked from this article….

Time-Warner’s 1Q2013 Lobbying Report lists $905,000.00 in total lobbying expenses, and a team of 4 lobbying on trade issues that included TPP, the New Zealand Copyright Act (http://fairdeal.net.nz/) and other matters.

In Q4 of 2013, Twenty-First Century Fox spent a total of $1.52million dollars on all their lobbying including the TPP, TTIP, and Trade Promotion Authority, better known as “fast track” authority.

Disney spent a total of $1.11million in the first quarter of last year on lobbying, spreading their TPP-related lobbying around in the House, the Senate, the U.S. Copyright Office, Patent & Trademark Office (PTO), the Office of Management & Budget (OMB), the Department of Commerce (DOC), and with the U.S. Trade Representative (USTR).

Do we perhaps begin to understand better why it is that the corporate/mainstream media has nothing at all to share with us about the secrecy and the potential pitfalls of current trade negotiations?