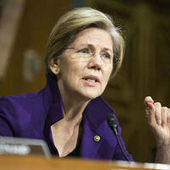 Wall Street Democrats are fighting back against economic populists like Elizabeth Warren and Bill DeBlasio.

Tell them you stand with the Elizabeth Warren wing of the Party.

“Wall Street Dems know populists like Elizabeth Warren are gaining influence with the Democratic base. Horrified, these Dems have launched an attack throughout corporate media that threatens electoral doom for the Democratic Party if it dares stand up to Wall Street.”