I realize that this will make some people uncomfortable and perhaps even angry.

It needs to be talked about.

Every thinking person regardless of political persuasion, party affiliation, or religious leaning knows (or should know) the following to be true.

Religion has no place in our politics.

The Founders enshrined that ideal into the Constitution.

Today, there is one and only one party ignoring this. One.

Goldwater warned us about American Evangelicals usurping the GOP. They have spent the last 5 decades convincing American conservatives that somehow Christians are being persecuted and discriminated against in America.

That, of course, is nonsense.

Now we have Republican presidential hopeful, Ben Carson, openly talking about how Muslims should be excluded from the presidency while The Donald openly mocks Carson for his Seventh Day Adventism.

This is why I firmly believe that today’s Republicans – both the politicians and those Evangelical Americans who support them – must be called to account publicly for wanting to violate a fundamental aspect of our democracy.

I never thought I’d say it, but I agree with what Goldwater said on this issue and with this passage in particular:

“I am warning them today: I will fight them every step of the way if they try to dictate their moral convictions to all Americans in the name of ‘conservatism.'”

Wouldn’t it be great if Republicans everywhere took the same stance as Goldwater?

Me, a dyed-in-the-wool liberal yearning for a Goldwater Republican. 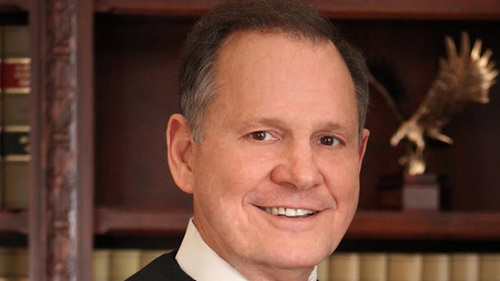 Speaking at the Pastor for Life Luncheon, which was sponsored by Pro-Life Mississippi, Chief Justice Roy Moore of the Alabama Supreme Court declared that the First Amendment only applies to Christians because “Buddha didn’t create us, Mohammed didn’t create us, it was the God of the Holy Scriptures” who created us.

“They didn’t bring the Koran over on the pilgrim ship,” he continued. “Let’s get real, let’s go back and learn our history. Let’s stop playing games.”

Everyone is entitled to their beliefs and their opinions.

Our elected officials and their appointees, however, seem to me to bear a special responsibility.

What happens to the public trust and the separation of church and state once remarks like those made by Alabama’s Supreme Court Justice, Roy Moore, are made in public?

Can they still be trusted to keep church and state separate?

Today, December 8, 2012, is Bodhi Day which, according to Wikipedia is,
“…the Buddhist holiday that commemorates the day that the historical Buddha, Siddhartha Gautauma (Shakyamuni), experienced enlightenment, also known as bodhi in Sanskrit and Pali. According to tradition, Siddhartha had recently forsaken years of extreme ascetic practices and resolved to sit under a peepal tree and simply meditate until he found the root of suffering, and how to liberate oneself from it.”
So to Buddhists everywhere, I’d like to send my best to you this day and everyday.

Ok, I admit it. This post and my well-wishes to Buddhists are the result of sheer happenstance. It all started when I read an email from a Christian relative. They are very concerned about the takeover of Christmas by the politically correct apparatchiks hell-bent on taking Christ out of Christmas. The chain email was meant to be sent to everyone, demanding that we stand up to the rest of society and express proudly to everyone (presumably whether they believe in Christ or not) a Merry Christmas.

That said, and besides not knowing that today is Bodhi Day, I’m supposed to wish everyone a Merry Christmas. Consider this greeting banked for those who believe until December 25th.

What I’m curious about now is how is it possible in the age of smartphones, ubiquitous wi-fi, and the 24-hour news cycle that I didn’t know that today is Bodhi Day? (Not to worry. I’ll get to Chanukah in a minute.)

How’s that possible? How can I miss a religious holiday at this time of year when the volume is turned up to what one of my fellow Coffee Party friends calls “a Spinal Tap 11” over the fears and concerns that America is losing sight of the religious significance of this time of year?
I think I know the answer.
First, it’s my fault. I’m an atheist. I don’t pay very much attention to religious holidays, and were it not for Facebook I wouldn’t know that today is also significant to Jews and the celebration of Chanukah. So, a sincere Happy Chanukah to Jews everywhere!

On top of being an atheist, I was raised by Catholics. These were two of the best and finest people to ever walk the planet, mind you, but they were not of a generation sensitive to multiculturalism. December – and for my father who was raised an Eastern Orthodox Catholic, it was January – meant Christmas and only Christmas. Besides being raised by Catholics, I grew up in an all-white, working class, and, as far as I know to this day, all-Christian enclave in southwestern Pennsylvania.

As for my public school education, and to the best of my recollection, there was absolutely no evidence whatsoever in the curriculum of any other holiday being celebrated in December besides Christmas. To their credit, we didn’t have Nativity displays at school, but I also don’t recall any lessons about other world cultures and their holidays. (Happily, educators are paying more attention to this issue nowadays. See “The December Dilemma: Acknowledging Religious Holidays in the Classroom”)

What else is going on in December and all year and with other religions, you might be asking?

One look at this Huffington Post piece on religious holidays for 2012 shows just how much religious celebrating is going on throughout the year for nine of the world’s major world religions: Baha’i, Buddhism, Christianity, Hinduism, Judaism, Islam, Paganism, Shinto and Sikhism. (What no Flying Spaghetti Monster?!?)

One of the takeaways for me was how many Christian religious holidays there are. They beat their next closest competitor, the Hindus, by more than 2 to 1. Who knew?

Besides winning the race to rack up the most religious holidays, Christians are also unmistakably among the largest religions by membership in the world and in America.

Given these facts, why do we seem to get treated each year around this same time to so much concern from Christians about their religion and their holiday coming under attack? For me to go merrily along with the chain email and to wish everyone a Merry Christmas may be the statistically correct greeting, but it still might not be right and it does nothing to account for the fact that not everyone is a Christian.

My advice to Christians is to relax. For now, you are the dominant religion in America. Even Gallup says we’re telling them we’re still a religious people and that we’re primarily a Christian nation. Please, stop with all the hand-wringing, wailing, gnashing of teeth and chain emails already. You’re the majority, no one is attacking you, and pretty much everyone still calls Christmas Christmas.

You shouldn’t think of “Happy Holidays” as an insult or an attack. I can’t for the life of me see how it diminishes or detracts one bit from your holiday. Is it so hard to accept that I simply don’t believe as you do and yet still want to wish you and everyone around me happiness? Is that so terrible, and why are you put off by the fact that I want to be as universal in my well-wishing as possible?

Ask yourself how you would feel as a Christian if I said Happy Chanukah or Merry Yuletide or Kung Hei Fat Choi. If I know you celebrate Christmas, I’m just as likely to say, “Merry Christmas!” If, however, I choose instead to say, “Happy Holidays,” it’s not a metaphorical slap in the face (although your prophet would tell you to turn the other cheek).

What’s the problem with Happy Holidays? For me, Happy Holidays takes all the risk out possibly insulting or offending the statistically less likely (and seemingly less emotionally troubled) encounters with Jews, Muslims, Buddhists, and even the rare Zoroastrianist. You don’t hear them complaining.

Please. Christians. I’m begging you. Take a break this year. At least take a breath. The rest of us in all the minorities who don’t believe as you do and who may or may not also be celebrating this time of year are not out to get you or to keep you from celebrating Christmas. All we want to do is wish you happiness.

Besides, all this complaining from the religion that holds the majority in population and in holidays is really tiresome, tedious, disingenuous, and is flat out spoiling the fun in the holidays – whatever holiday we choose to celebrate – for the rest of us.

Happy Holidays, One and ALL!

“Whatever the reason, the perspective in these clobber verses were based on an understanding of sex and sexuality that was just as misinformed as their understanding of the earth in relationship to the sun, of fish, of pork and of reasons for stoning children. In our scientific age, it is time to let go of archaic perspectives and start recognizing the things that are truly an abomination in the eyes of God: lacking in compassion and love, exercising judgment against others, and practicing and encouraging hate.”