First, the obvious. Not all libertarians are alike. The same, of course, is true for conservatives and liberals.

That said, I’ve had my fill of libertarians acting like they are the only ones who believe in a free society. That’s total bullshit, of course. I don’t know anyone who likes “state oppression,” do you? The debate needs to be – oh, eff that. I’m done debating strawman arguments like that.

Where I really part company with libertarians is in their naive belief that markets operate in the way that Murray Rothbard describes them. They don’t. That “philosophy” requires a belief in something called, “Equal and simultaneous information.” It’s actually how the financial services industry is supposed to operate but doesn’t. And, why doesn’t it? Because of the lack of vigorously enforced and sensible laws and regulations.

What’s worse is when libertarians use phraseology like “state oppression.” They come off sounding like they have a tinfoil fear of the state.

Yes, of course, there are things about “the state” that libertarians and I want to change; from NDAA to NSA to KXL. Their incessant vilifying of “the state,” however, without including corporations and Big Money as the driving forces is, at best, disingenuous and, at worst, revealing of their libertarian naivety or outright corporatist obfuscation.

Remember this. WE ARE THE STATE.

Unlike government, corporate boards – and let’s not be naive about whatever paltry shares we as individuals may hold – are not elected by we ordinary citizens. We have no way of holding corporations accountable EXCEPT through the state regardless of the fantasy of the Invisible Hand libertarians may worship.

We do – or, rather, we’re supposed to, but too many of us don’t – elect those who are supposed to represent us in our government. We can control that.

For me and for as long as I’m able, I’m going to try to influence my fellow Americans to vote against libertarians (and conservatives) because of how their philosophies manifest into their policies; policies that put all but a few wealthy and powerful individuals in real peril because they stem from beliefs based on the fallacy perpetuated by people like Rothbard, the Kochs, the Cato Institute, the Heritage Foundation, and all the devotees of Milton Friedman.

Libertarians are probably not Statists, whatever they think that’s supposed to mean and whatever is meant by it when the “purists” accuse Rand Paul of it. He and his “mainstream” libertarians are, however, most certainly Corporatists in the mold of his fore-bearers.

And that, dear reader, is the dirty little secret of libertarianism as it’s being practiced today. It is a front for Corporatism, and it’s far more dangerous to our society, to our democracy, and to our planet than some misplaced and misinformed hand-wringing about “the state” somehow holding back “free markets.”

Call them out on it, and vote against every single one of them and their big brother proxies, the Republicans.

If you’re like me, you may have little to no understanding or appreciation for something called the Export-Import (Ex-Im) Bank.

Here’s an excellent description of the Ex-Im:

And it’s not just the big companies like Westinghouse that benefit from the program: About 90 percent of Ex-Im bank transactions in 2013 benefited small business, according to NAM.

So, why would Republicans and libertarians – including the Koch brothers and Koch-backed groups like The Heritage Foundation and Club For Growth – want to kill it?

This excerpt kind of says it all:

“Ex-Im represents both a policy and political target because it’s do-able,” said Diane Katz, a Heritage research fellow. “We’re not trying to take down the Federal Reserve here. We’re starting with an agency that is ripe.”

On the surface, the 80-year-old bank isn’t an obvious target. Rather than costing taxpayers money, it regularly returns a profit to the Treasury — more than $3.4 billion since 2005. The bank says its programs generated about 2 percent of the $2.3 trillion the U.S. exported last year.

….At least five groups opposing the bank’s renewal, including Concerned Veterans for America and the 60 Plus Association, received nearly all of their funding over an 18-month period ending in December 2012 from the Kochs’ political network — a total of $47.4 million, according to an analysis by the Center for Responsive Politics researcher Robert Maguire. Another group, Americans for Prosperity, founded by the Kochs in 2004, is also lobbying against the bank.

To all my fellow middle class and ordinary Americans still identifying with the GOP, the tea party, and with libertarian principles, when will you come to grips with reality?

A vote for Republicans – and a misguided and misinformed belief in libertarian mythology like the Invisible Hand of free markets – is a vote against American companies, American jobs, and a vote and belief system that goes against your own economic self-interest.

Will there ever be enough evidence to convince you? 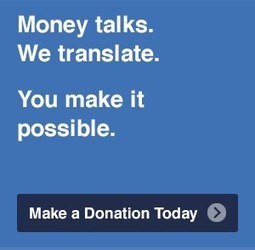 The influence industry sometimes produces strange bedfellows. Case in point, according to recently filed lobbying disclosure reports from 2014’s first quarter: The same lobbying firm that represents Koch Companies Public Sector and the U.S. Chamber of Commerce in their efforts to keep the IRS from tightening up regs on dark money groups also represents one of the biggest names in organized labor.

Of course, organized labor is not necessarily unfriendly to the idea of outside money groups; unions have made great use of super PACs and have beenlinked to liberal dark money groups likePatriot Majority. But the prevailing narrative of partisan politics puts unions on the opposite side of the battlefield from the billionaire brothers David and Charles Koch (and by extension the conglomerate they own, KCPS).

<and the point not to miss>

An interesting and important article that includes this fact:

KCPS, on the other hand, spent $10.4 million last year on lobbying. 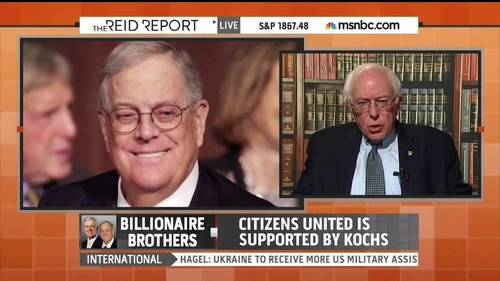 Sen. Sanders talks with Joy Ann Reid on MSNBC about his Huffington Post column on the Koch brothers. Read the article here: http://www.huffingtonpost.com/rep...

The more dangerous and extreme Libertarian ideals of the 1980 campaign – when Charles Koch as veep candidate and Reagan was too liberal for him – have become mainstream GOP ideals. Think about that.

Charles Koch of Koch Industries, wounded to the core of his being by allegations from Senate Majority Leader Harry Reid and others that his championing of the “free market” conceals lobbying efforts to rig the system in his favor, suffici