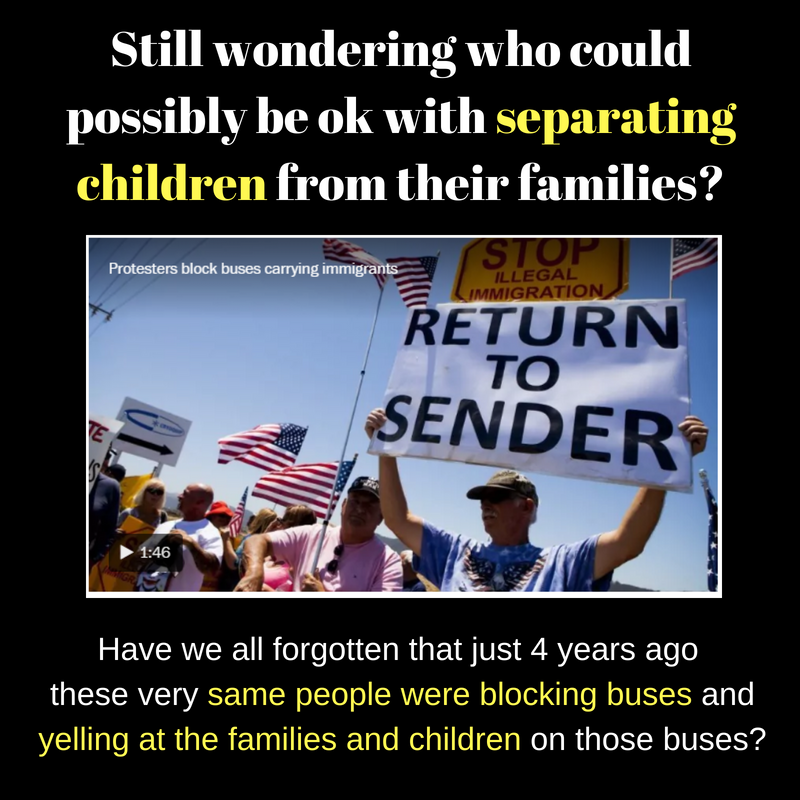 If you need a reminder about what happened then: “Protesters in California block busloads of immigrant children and families”; Washington Post, July 2, 2014

People have a way of showing their true colors. American conservatives for the most part have been doing that my whole life.

Want to change the world?

Then start by making sure your vote cancels out an opposing Republican vote and that your vote isn’t wasted…… no…….. worse than wasted……. that it doesn’t help to ensure more Republican rule at any level of government.

Because, like it or not, that’s the world we live in now, and this is how it works for now.

We’ll never get to the social, political, and economic changes we on the left want so long as Republicans are in charge. There’s only way to change that, and there’s only one Party today capable of bringing about that change.

So, let’s unify behind one strategy and the one and only Party as of now who can help us to win the war against conservative ideology by first winning the battles we actually can win like the Congressional midterms.

Peaceful protesting and voting is how we’ll change the travesty that is Trump and the GOP. The question is can and will the left put aside their differences to bring about that change?

Trump supporters are a minority of the voting populace. Remember, he lost the popular vote by over 3 million.

His and the GOP’s defeat begins in November and rests solely with the rest of us uniting to replace Republicans everywhere and at every level of government.

We all have to register to vote, and we all have to show up for every election; from township boards to school boards to borough mayors, and from city and county councils to state and federal elections every time and for every office.

Hold your nose if you must, but stop being childish about the choices on offer and the reality that is the present day two-party system.

If you don’t show up to vote and if you don’t vote for Democrats, you are helping to ensure that we’ll continue to have Republican rule that is, at this point in our history more than ever, about authoritarianism.

It won’t get better – and it will only get worse – if we don’t unite to change it.

What will you be doing?

Like Loading...
If you call yourself a Republican, vote for Republicans, make less than 200-grand a year, and think the GOP tax plan is good for you, you have been duped.
Again.

Every time I eye the GOP’s tax plan, I’m reminded of Ebenezer Scrooge’s wish to “decrease the surplus population” of the working class and poor.

Scrooge’s sentiment is re-animated in myriad ways that punish retired, working folks and the poor in recent GOP attempts to reward the ultra-affluent and corporations in their version of “tax reform.”

Want to see how bad it is?

See “How Many People In Your Income Group Would Get a Tax Cut?”
It shows that if you make $30,000 – $40,000 per year, 61% of taxpayers in your income group would get a tax cut in 2019.
Sounds good, right?
Now look at the facts.
500 bucks. Maybe more. Feels like “winning” to you? Fine. Live it up now, because it won’t last.
The equivalent of 40 bucks or so a month at best. Feeling that GOP slap of your face yet?
How’s that kick in the nuts you’re getting from your Party feel? That feel like winning to you 1/3 of people in this income category?
Well done. You’re the big “winners.”
By 2027, 9% of you will get a tax cut and 21% will pay more in taxes.
Plan to let us know how sleeping in that bed you made for everyone feels, won’t you?
Oh. One more thing.
Please plan to explain your loyalty to and your voting for Republicans when the 1 trillion dollar shortfall in 10 years adds to the deficit, and you and your friends and relatives see their Medicare, Medicaid, and Social Security fall shorter and shorter of their needs.
Yep.
If you’re not already in the top 10% of income earners making over 130-grand a year and you’re still voting for a Republican, any Republican, in any level of government, you have been and continue to be duped. And, this is just on the facts and reality of economics. It says nothing about the complete bankruptcy of the party on social, moral, ethical, intellectual, and ecological issues.
This country will be great again, but it won’t be thanks to you Republican voters who keep voting against your own self-interests and the best interests of your family, friends, neighbors, fellow American citizens, and the rest of the world.
So, go ahead and continue to willingly set yourself up as cannon fodder for Republican politicians and the people who pull their strings. The rest of us will clean up your mess.
Again.
Oh, and no, Democrats aren’t perfect. Save your breath. That’s not what I’m suggesting at all, and that is a ridiculous retort.
That said, however, the one thing Democrats absolutely are not are the same as Republicans.
Which also means you so-called progressives and liberals need to stop with that bullshit, too. You’re embarrassing yourselves.

This is exactly how I feel toward the GOP.

There can never be another compromise with them on anything. Ever.

Trump is all the proof any thinking person should need to accept the reality that conservatives and Republicans are waging a war on decency, intellect, intelligence, and the future.

The Republican Party is the enemy of everything this country is supposed to be about.

Show up on every election day to vote against every Republican at every level of government, from school board and town council to Congress and the Presidency. If we don’t, we don’t get to complain, and we can’t be angry and outraged about the country sliding down the slippery slope toward the kind of hate-filled, corrupt, and stupid kleptocracy embodied by Trump.

But, stay home or throw away your vote, and you need to understand that you’re helping the GOP.