Is this really what the First Amendment is about? 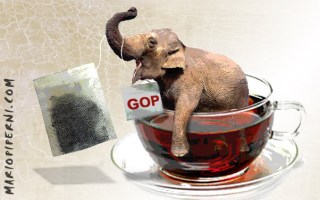 “Just think if those Frosted Flakes brand gurus felt that the problem with selling their cereal to diabetics was one of semantics, not sugar, or that customers’ inability to afford boxes of the stuff was simply the free market in action. What if the company did things to limit who could hope to buy its products, or found ways to punish customers who didn’t. How about if it envisioned a radically new idea of what breakfast meant entirely, including where, when and by whom it would be eaten (and claimed it was the only way breakfast could survive as an institution), only there were other solutions to changing breakfast, and everybody knew about them.” – Jonathan Salem Baskin, AdAge
As the paragraph in the AdAge article which precedes the above excerpt points out, “selling products instead of meeting consumer needs” is a predictable path to failure. It’s true for cereal and for politicians.
Republicans in this cycle clearly chose a losing branding and marketing strategy. They branded themselves and their solutions to appeal only to those who were already sold on their ideas. To compound their problems, they then made no attempts to do anything but alienate anyone who wasn’t already sold. How in the world is that supposed to attract new “customers” to their party?
It now seems pretty clear that, along with a deficient “product” in terms of policy positions, the other really big failure came from the decision about whom they chose as their core target market – the ultra-conservative, neo-libertarian, and mostly low-information white male voter. I’m not trying to be unkind with the “low-information” description. I’m simply basing that on the amount of shock and surprise that seems to have overwhelmed all the GOP-supporting media outlets like Fox, AM talk radio, and even the so-called strategists like Mr. Rove. As for the “white male” component, those numbers are easily confirmed at sources like CNN.
Assuming that their core target market is the non-Hispanic white (and more male than female) voter, their core target market is also too narrowly defined, too small in shear numbers, and insufficiently interested in and motivated by their product to have won big in this election. By all accounts with which I’m familiar, and if the trends hold true into the future, the non-Hispanic white market is also going to be a shrinking market. This gives the current GOP strategy even greater appearance as being on the path toward even greater losses in the future.
“The non-Hispanic white population will increase more slowly than other racial and ethnic groups; whites will become a minority (47%) by 2050.” (Pew Research Center, U.S. Population Projections: 2005-2050, February 11, 2008)
It will be interesting to watch what evidence there will be about precisely what the GOP leadership has learned from this election. I’m pretty skeptical about what that will be. McConnell already sounds as intransigent as ever, and I have almost no expectation that Boehner actually has the courage to distance himself and the rest of the House from the tea party caucus.
To be sure, the post-election landscape is only beginning to take shape. Still, I wonder who the more rational heads are within the GOP?
Yes, Huntsman gets some well-deserved attention as a likely candidate to help lead the GOP back toward a more reasonably-defined center, but he’s currently unemployed, as it were. He also doesn’t seem to me to fit the current mold of a party that inexplicably is willing to give their stage over to the likes of Cain, Bachmann, and Perry as presidential candidates. (Side note: Kudos to the GOP for having the good sense to ostracize Palin and recognize George W. Bush as a marketing liability.)
Without some dramatic and immediate changes, I suspect that the GOP – with the help of Fox, talk radio, and the Sheldon Adelsons of the world – will continue to pursue a strategy based more on spin and deception than on facts and reality. All that said and as much rancor and entrenchment as there seems to be these days, I’m cautiously optimistic.
I’m optimistic that concerned citizens like those involved with the Coffee Party (http://www.coffeepartyusa.com/) will keep taking the time to separate fact from fiction. I’m optimistic that they’ll take the time to try to influence the public discussion about the real problems and challenges facing our society and the world at large, as well as what the options are for addressing them in everyone’s best interest.
I’m even more optimistic about the generation of 20-somethings coming up behind us. Speaking from first-hand experience as the proud father of two 20-somethings, they aren’t nearly so gullible and easily duped as our generation (or at least a significant portion of us) seems to be. I only hope we don’t end up leaving messes so big even they can’t clean them up.
It’s important for all of us to take the time to inform ourselves, to ask those to whom we listen or elect to back up their statements and positions with facts, and to be willing to compromise but only to the degree that such a compromise will serve the greatest good.
As for the Republican party, my advice is the same that Hal Ziegler offered just before his passing: real leaders within the GOP better start rising up to loudly and proudly call their colleagues out when they are being ideologues, especially when that ideology isn’t rational, truthful, or anything except obstructionist. And, they better hurry. Their party, to borrow a word from Mr. Rove’s fundraising efforts, really seems to be at a crossroads.