Robert Reich had this to say about a New York Times article, “Auto Industry Galvanized After Record Recall Year”

His closing question got me thinking about the corruption of money in our news and in our politics.

I often feel like what I’m hearing from the trickle-down and Invisible Hand believers is, “We need to protect money and companies first; otherwise, Money will take its ball and go home, leaving the rest of us without jobs.”

It’s all about fear for them. They want – no, they need – us to be afraid of them and each other, and corporate media is complicit in this fear-mongering.

The article and Reich’s comments had me asking myself, “Whether you’re a drug maker, a driller, a food company, a chemical company, or a car maker, don’t you have a responsibility to society to operate safely and within the law? Isn’t that also just smart business? Think about it. When companies make mistakes, it often (but not always) costs them something. Sometimes that something is money. Sometimes it’s time in the form of community service and even incarceration – although those seem to be more and more rare all the time – but time is money in our society, so doesn’t it makes sense to do the right thing even when no one is watching?”

Maybe I’m naive about capitalism. Maybe I’m just too optimistic about my fellow Americans, too, but how come Americans aren’t more united in our demands that corporations operate with one eye on the bottom line and the other eye on what’s best for society?

It makes common and business sense, doesn’t it? If big mistakes can cost so much in lives and treasure, why aren’t we as stakeholders in society and in the economy more unified in our outrage over the corrupting influence that money has on our business leaders, our media, and in our government?

Could it be that we’re not all operating with the same facts? It must be; otherwise, how is it possible that some of us think that the right thing to do is to make life even easier for corporations and the rich and powerful who run them instead of insisting that they “do no harm” while they make money?

In other words, why can’t capitalism have a conscience?

The first is that the tiny few who control all of our society’s wealth and power are, in fact, sociopaths fitting Merriam-Webster’s definition, “someone who behaves in a dangerous or violent way towards other people and does not feel guilty about such behavior.” They don’t seem all that interested in or concerned about what their behavior means to the rest of us. They seem only to care about their own wealth and power despite the fact that, as Fortune Magazine points out, “While inequality is a natural result of competitive, capitalist economies, there’s plenty of evidence that shows that extreme levels of inequality is bad for business.”

Income and wealth inequality haven’t been like they are now since the Great Depression.

The second reason we don’t seem to be united in our outrage rests, I think, with the fact that far too many of us are duped by the media into agreeing with and even admiring the very richest and most powerful people among us even while they pass laws and make regulations that help the rich at our expense.

It cannot be denied that money in politics drives policies and legislation. Laws and regulations and the consequences for violating them, however, are different for us than they are for Big Money. If you ask me, the whole notion of what we call “government” these days seems to be a system designed by the rich and powerful to empower the already rich and powerful; “…the wealthiest 160,000 families <who> own as much wealth as the poorest 145 million families.”

Too many people want to claim that both parties are equally to blame for our problems. Others are too eager to profess that our one-sided economic recovery – it’s a recovery on Wall Street and for the wealthy – is slow in coming for everyone else because of the policies of so-called tax-and-spend liberals and Democrats.

Neither sentiment could be further from the truth.

Republicans at least since Reagan and on through to George W. Bush have made their political careers lying to us with their blaming of government for all of our woes. What they’ve never bothered to tell us is the truth: they are beholden to the likes of the American Legislative Exchange Council (ALEC) – the secretive, “…nonprofit organization of conservative state legislators and private sector representatives that drafts and shares model state-level legislation for distribution among state governments in the United States,” – has been writing state and federal laws and regulations for the GOP for decades.

When I talk about Big Money, I’m referring to the 0.000042% – yes, that’s four zeros to the right of the decimal, or 42 one-millionths of Americans and just 132 people – whom Larry Lessig tells us are responsible for 60% of all SuperPAC money.

I’m also referring to the people who sit on boards and who run at the highest levels the biggest corporations, the largest insurance companies, and the Wall Streeters who capitalize and profit, as the crash of ’08 taught us, from both the ups AND the downs that they themselves create.

All of that money coming from so few has corrupted our media and our government. What was once bad has become worse thanks to the Citizens United and McCutcheon SCOTUS decisions. These rulings were affirmed, mind you, only by the GOP-appointed judges, and it was those decisions that created an even more rigged electoral, legislative, and judicial system. These are now systems that essentially allow the perpetrators of inequality and lies to dictate through their proxies in government and in the courts what is and what isn’t legal; what is and what isn’t a just punishment; what is, if any, just compensation and to whom it is paid for their mistakes – willful or accidental – that cause economic, psychological, and even physical harm and death.

If you’re a car maker that knowingly produces cars with a defect that kills people, are even the billions of dollars you must pay justice if no one goes to jail for it?

If you’re the CEO of a chemical company that pollutes the drinking water of 300,000 West Virginians, what does justice look like to you for those people?

If you’re Jamie Dimon, Brian Moynihan, or any other banker who knows they are too big to jail and too big to fail, why wouldn’t you operate with impunity and without regard for how your decisions impact the rest of society unless, of course, the answer is, “Because you’re not an effing sociopath, that’s why.”

And, what about our news media’s role in all of this?

Amidst everything happening in state capitols, boardrooms, and in DC, the corporate media continues to feed America a steady diet of things like the annual War on Christmas, the Ebola panic, the invasion of immigrant children, and missing jets. Anything akin to the first three, in my opinion, is a sad commentary on our intellect as a society, while the latter is simply a sad story which some apparently are attributing to…..wait for it….the metric system.

What other conclusion are we to come to except that corporate/mainstream news is a charade? It’s just one more way for the media conglomerates to make money by selling our ever-diminishing attention to their advertisers.

Corporate news media does not serve to educate or inform us. It does not reveal what we must know in order to consider what we must do as citizens to change and reform what needs changing and reforming the most – the corrupting influence of Big and Dark Money in all levels of our government.

These lies are just what those in power count on us to believe. It’s what makes you and I precisely the audience Big Money wants – a divided populace who is willfully ignorant, woefully misinformed, eager to vote against their own self-interests, and who refuses to unify against them.

If and when we do, we’ll actually have a democracy. Until then, look around. This is what we have because it’s precisely what we deserve.

If you’re ready to help change things for the better, check out these organizations. 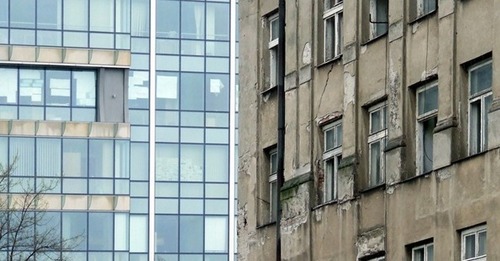 The rise in inequality experienced in the United States in the past three-and-a-half decades is not just a story of those in the financial sector in the greater New York City metropolitan area reaping outsized rewards from speculation in financial markets. Rising inequality and increases in top 1 percent incomes affect every state.

Economic inequality is, at long last, commanding attention from policymakers, the media, and everyday citizens. There is growing recognition that we need an inclusive economy that works for everyone—not just for those at the top.

While there are plentiful data examining the fortunes of the top 1 percent at the national level, this report examines how the top 1 percent in each state have fared over 1917–2011, with an emphasis on trends over 1928–2011 (data for additional percentiles spanning 1917–2011 are available at go.epi.org/top-incomes). In so doing, this analysis finds that all 50 states have experienced widening income inequality in recent decades.

Economic inequality is, at long last, commanding attention from policymakers, the media, and everyday citizens. There is growing recognition that we need an inclusive economy that works for everyone—not just for those at the top.

While there are plentiful data examining the fortunes of the top 1 percent at the national level, this report examines how the top 1 percent in each state have fared over 1917–2011, with an emphasis on trends over 1928–2011 (data for additional percentiles spanning 1917–2011 are available at go.epi.org/top-incomes). In so doing, this analysis finds that all 50 states have experienced widening income inequality in recent decades. 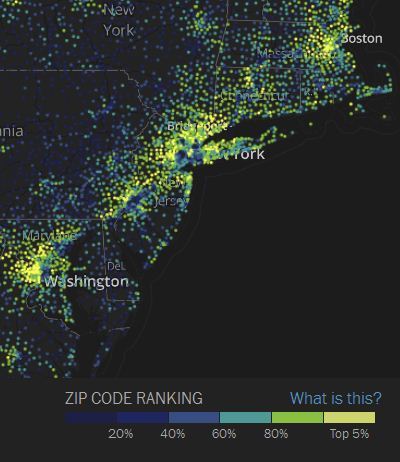 Amazingly clear and detailed “view” of where wealth is concentrated. Drilling into zip codes shows remarkable details without being overwhelming. This is simultaneously revealing and mesmerizing. As I looked at it, I couldn’t help wondering how and why it is that the people living in the vast “dark” regions of the South and the Great Plains insist on voting against their own economic self-interests by voting for representatives who insist on the lie of trickle-down economics and persistent austerity as the strategy for prosperity.